From the Daily Pilot
Tuesday, September 7, 1999

The Law and the Oldest Saloon in Town

Sid Soffer has been a fugitive longer than David Janssen. The Reason? A Difference of opinion between Sid and Judge Susie Shaw. The origins of this difference are lost in the shades of antiquity or, as we lawyers say, "Beyond which the memory of man runneth naught." You can't beat us lawyers when it comes to screwing up an easy concept. Anyway, to simplify the matter, Judge Susie wants to put Sid in jail, Sid doesn't want to go to jail. As a result of this difference of opinion, Sid is living in Las Vegas. I suppose that if you can't live in Newport Beach, living in Las Vegas is better than living in Siberia or Afghanistan. Because I like both Sid and Judge Susie I shall say nothing more about their differences of opinion; however, since Sid is an integral part of the following article I felt I should explain his absence. 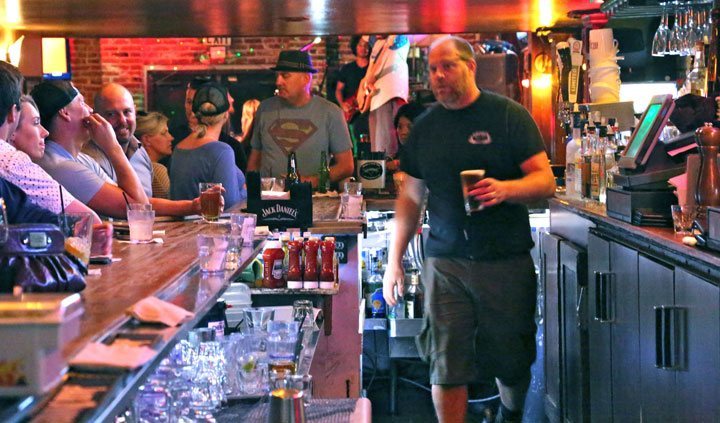 This is an abbreviated history of the oldest bar in Newport Beach. It is located on that funny little half street knows as 21st Street in old Newport Beach. This bar has been known during the last 87 years either as "Stark's" or "Sid's Blue Beet." In 1912 (a year after I was born) a man named Henry Stark opened a saloon on that street. To ensure that no one would have any doubt as to the business being located there, Mr. Stark went to Cripple Creek, Colo. And purchased the back bar from an authentic gold rush-style saloon and installed it in his saloon. Those were the days of "local option." From time to time Newport Beach was either "dry" or "wet". All that didn't make too much difference to Mr. Stark because he was open during both the "dry" years and the "wet" years. When Prohibition arrived, Mr. Stark treated the law with lofty indifference and remained open. In those days, this was a tolerant town.

After Henry Stark died, his son-in-law, Bert Oquist ran the place until Sid Soffer came along during the mid-60's and bought it. He renamed it "Sid's Blue Beet" and it became an immediate smash hit. An interesting place to go.

Sid made certain changes. He dispensed with the services of "Dollar Dolly", an ancient lady of the evening who trolled Stark's and its next door neighbor, Tom Carson's Stag, in search of customers.

Sid also closed the town's oldest 24-hour poker game that had been running without interruptions since 1912. When the saloon closed at 2.a.m they simply closed the door between the bar and the poker game. The game would then continue until the saloon opened again at 6 a.m.

Sid ran the place a few years, and then for several more years leased it to various people who always ran it as Sid's Blue Beet. Then one night one of his tenants got a little careless and the place burned down. The Cripple Creek back bar was damaged but not destroyed.

In the meantime, Sid had bought Whiskey Bill's saloon on Old Newport Road and was running it as Sid's. It was a highly successful restaurant and bar. At the same time, he had moved the old back bar to his new place and was refurbishing it when his troubles with Judge Susie developed and he departed for Las Vegas.

At present, Steve Lewis has taken over the Blue Beet and has effected a reincarnation of the old Blue Beet. It is still Sid's Blue Beet, but a notice at the door says "Sid Ain't Here….Don't Ask". I don't drive anymore so I haven't been there, but I am advised that it is a very popular and very successful.

So that is the story of the oldest saloon in Newport Beach. I don't see how our city can ignore this historical treasure. If the city can put a bronze tablet on the site of the Rendezvous Ballroom, I think it should do the same for Stark's Saloon/Sid's Blue Beet.

by Judge Robert Garner
Reprinted by permission of the author

The beat goes on at the Blue Beet. Owner Steve Lewis has brought his son, Scott, in as a partner and together they have continued the tradition of quality food at reasonable prices coupled with a lively bar scene. Live music and dancing featuring high energy local bands are more popular than ever. Recently craft beers dominate the tap handles, with new and exciting beers being offered each month.

Get up-to-date information on upcoming events, news and promotions.

© Copyright 2018 by The Blue Beet. All Rights Reserved.
Developed by Read Write Code